Kurumin Aroma felt like her life was over at just 21. She was about to enter her senior year at college, had already been accepted onto a stuffy conglomerate’s graduate program, and was staring at years shuffling paper in a beige cubicle.

So when the suave man with flash business card approached her in Tokyo’s bustling Shinjuku neighborhood, talking enthusiastically about a career in modeling, dreams of exotic photo shoots and star-studded parties washed over her.

“It was perhaps a little easier for him to persuade me than it should have been,” Aroma, who uses an alias in public, tells TIME.

Fast forward eight years and Aroma looks back at the episode with crushing regret. But she is determined to weaponize the ensuing trauma to help stop others from becoming, like her, one of the hundreds of young Japanese women coerced into pornography by tricksters masquerading as legitimate modeling agents.

After being pressured into signing a convoluted contract, and flown to a remote location far from home, she was bullied into sex acts before rolling cameras, with threats of legal repercussions if she didn’t acquiesce. “I really didn’t feel I was able to say no,” she says.

It’s a common story. The coercion of young women into pornography and prostitution has become an epidemic in Japan, where the fetishization of adolescence is disturbingly common and legal protections for children shockingly lax.

Shihoko Fujiwara, founder of the Lighthouse NGO that helps victims of sex trafficking in Japan, says she took on 103 new cases last year—similar to Aroma’s—on top of the hundreds already on her books. Ten years ago most of those she helped came from abroad, but today the bulk of cases that come before her charity comprise teenage runaways and abuse victims from Japan.

“It’s definitely on the increase,” she says. “We have also seen lots more children victimized in the commercial sex industry come to us for help.”

Japan has some 300 cafes—the ones in Tokyo fill a whole street—where teenage girls in school uniform chat to older men for about $50 per hour (including all the beer you can drink). Men pay to hold hands, go for a walk or even snooze on a girl’s lap. Some then arrange “dates” away from the café. An estimated 5,000 teenagers earn cash this way.

Most shockingly, child pornography, only made illegal in 2014, remains rife. An extensive study found 15% of the male population have viewed child pornography while 10% own it. There is also a booming and perfectly legal trade in “Lolicon”—Lolita themed manga and anime—featuring extreme violence, rape and incest involving children. Sexually suggestive videos known as chaku ero, which don’t show naked genitals, buttocks or breasts, but can feature children as young as six-years-old, remain legal.

There are few laws to protect children. In April, protests erupted in Tokyo after a father walked free after raping his own teenage daughter because she did not put up what the court considered “sufficient resistance.” And while it is illegal for a woman to be paid for sex, “Around 100 pimps are out on the street every night trying to recruit young girls,” says Yumeno Nito, of Tokyo’s Colabo NGO. It’s also legal for a man to solicit customers for a female sex worker.

Every Wednesday, Nito and her volunteers drive a big pink bus to hotspots in central Toyko and set up their mobile Tsubomi Café to help at-risk girls. It offers food, coffee and counseling, as well as condoms, toothbrushes and feminine hygiene products, to girls who would rather hang out on the street than go home.

“We are mainly helping teenage girls who are abused by their parents or don’t fit in at school,” says Nito, who also runs a shelter for runaway youngsters.

It’s an unfortunate fact that the world’s third largest economy struggles to provide adequate social services for young people. Last year, Japan had only 3,250 child welfare workers on the books, but 122,578 reported cases of child abuse. Despite the government’s intention to add another 2,000 welfare professionals, Nito says most resources are spent on services for infants and the very young, meaning teenagers slip through the cracks.

Other then being approached on the street, young people are commonly groomed online. Often, they are coaxed or coerced into sending nude or compromising photos of themselves to predators, whom then use that material to extort more sordid contacts, beginning a worsening spiral of abuse. An estimated 170,000 junior high and high school girls are engaged in prostitution. Once snared, some actively solicit men online or attempt to earn money by selling nude photos or underwear.

“They feel like they are being empowered by being abused,” says Fujiwara.

Once released onto the web, photos and videos are almost impossible to completely remove. For a young person to have their molestation constantly shared in the public domain can be devastating. Many suffer for years and feel forced to quit jobs or college.

“Some of them commit suicide,” says Fujiwara.

Aroma spent years trying to expunge films of her abuse from the Internet. “Every time I managed to get a copy taken down another one is loaded up, so eventually I just gave up trying,” she says. The agency she signed with closed down and her abusers are difficult to track down. While her immediate family has been supportive, she says some relatives have broken off all contact, unable to handle the shame. 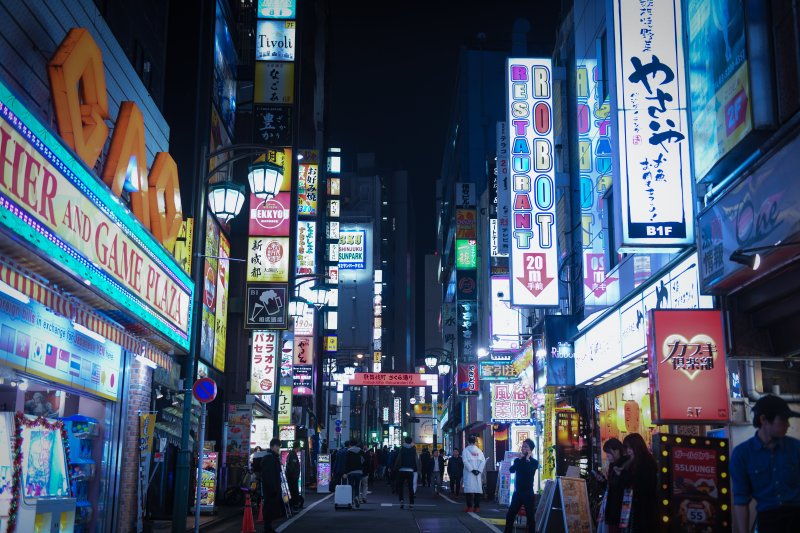 Illuminated signs are displayed on the exterior of commercial buildings at night in the Shinjuku district of Tokyo, Japan, on Wednesday, July 21, 2018. Noriko Hayashi/Bloomberg via Getty Images

‘We just don’t have a proper system’

Fujiwara says international pressure is key to fixing the system. The move to finally outlaw child pornography came after concerted pressure, primarily from the Swedish government. A visit from and damning 2016 report by, the U.N. special rapporteur on the sale of children, child prostitution and child pornography, prompted a bill currently under consideration that aims to boost legal safeguards relating to child sexual exploitation.

Still, Japanese law says victims of sex trafficking must arrive in Japan from another country, which is at odds with the internationally recognized definition. As such, despite the multitude of cases NGOs like Lighthouse and Colabo see on a daily bases, Japan officially recognized only 25 trafficking cases last year. What’s more, Japan still doesn’t have a dedicated human trafficking law.

“We just don’t have a proper system,” says Fujiwara. “Victims of human trafficking are put into a domestic violence shelter, which is awful.”

With the Olympics arriving in Tokyo next summer, activists hope the world’s gaze will force the government to properly address the issues. Already, pornography has been removed from convenience stores and a new registration criteria introduced for Kabukicho’s seedy establishments. Yet some also fear this is just sweeping the problem under the carpet.

Aroma, for one, has little faith in her government’s desire or wherewithal to tackle the issue. Instead, she uses her Youtube channel to raise awareness of sexual exploitation. She believes the key is on educating young girls about the gap between what they see on TV and life’s cruel reality. Too often, she says, “you think your dream is to be a pop star, but then the situation suddenly turns tragic.”

—With reporting by Mayako Shibata / Tokyo